Given her brief life, there’s little known about Marjorie Sporup.  Born in Seattle, Washington in December, 1917, young Marjorie was raised in Portland, Oregon where she attended public schools.

One April day in 1932, Marjorie traveled to the Oregon coast with family friends.  While there on a boating excursion, she drowned in the Pacific Ocean with three other souls.  Marjorie Sporup was just 14 years old.

Death brings questions.  And while dying is an inevitable part of life, the passing of one so young is heartbreaking. After writing a poem about Marjorie’s short life, it blossomed into a complete song. 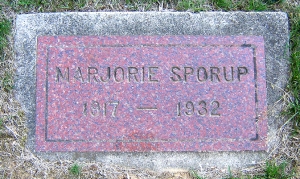